The first part of my serialised gruesome zombie story just went live on Amazon. Check it out: 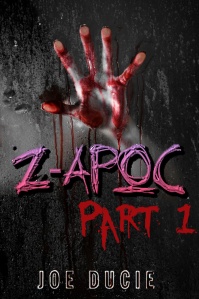 Here’s the rather gripping synopsis:

A year later, scavenging alone in the apocalyptic wastelands, John searches for a rumoured food distribution centre. In the the ruins of Wyong, a town just north of Sydney, he encounters Sarah Bell, another survivor – hiding a dark secret about the hordes of roaming dead, and holding the future of humanity in her hands.

Thrust together in a world gripped by horror and sickness, John and Sarah must make choices that could mean surviving another day – or falling to the endless waves of walking dead.

You can pick it up here.

Recently, and with the ever-increasing rise of the almighty e-book, the industry has seen a swing toward serialised stories. Z-APOC represents my humble contribution to this not unwelcome trend. I’m intending to release one part every five to six weeks, and then the whole thing as a collection further down the line.

Rather excited about this. An end of the world story with a twist!

Again, get yourself some awesome right here.