Distant Star is the first volume in the Reminiscent Exile series. 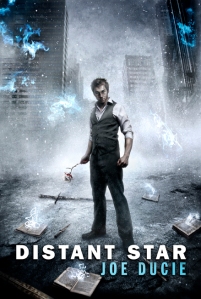 For Declan Hale, the Shadowless Arbiter, life has been simple since he ended the Tome Wars and forced a cruel peace in the mythical realms of Forget. Exiled to Earth for his crimes, Declan spends his days managing a small bookshop.

So when a familiar looking corpse appears in the dead of night, spilling his scotch, Declan is less than amused. Especially because the body is his own. Someone—or something—has sent a calling card from the future.

Daring him to confront his monstrous past.

The last time Declan went to war, Ascension City burned and eight million people lost their lives. The Knights and Renegades should have left him alone…

An urban fantasy story, the first in a series, that spans worlds, universes, and time. Join Declan as he battles friends, enemies, kings, and the gods themselves in his struggle for redemption.